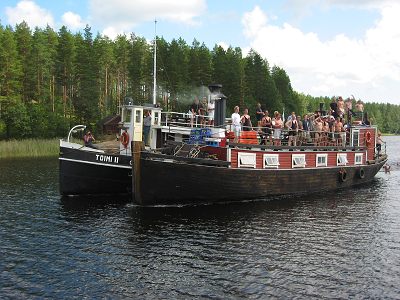 AIS, or Automatic Identification System is not much unlike APRS - it is a professional tracking system for ships. It runs at 9600 bit/s (GMSK) on two marine VHF frequencies, with a nice binary protocol which features automatic synchronization and time multiplexing - even with a very high number of vessels transmitting position reports once every 2 to 10 seconds, packet collisions will not be a problem. The protocol is unencrypted, standardized and well-defined, but unfortunately patented.

aprs.fi welcomes everyone to receive AIS data and share it with other users by submitting it automatically to the service.

What is needed to receive AIS?

To receive AIS transmissions you need a 9600 bit/s data capable VHF receiver which can receive the marine VHF channel 87B (161.975 MHz) or 88B (162.025 MHz). Most new amateur transceivers and scanners have DATA plugs with a discriminator output which is good for decoding 9600 bit/s data. The discriminator output is connected to the audio input (line or mic) of a computer and a DSP software demodulator is used to decode the GMSK data.

Decoding can be done using ShipPlotter on Windows, or by gnuais on Linux.

Use the following settings:

You can put aprs.fi as server 1 or server 2, as you wish. Just remember to set the Share ID to a lower-case letter. This is a convention to announce permission to redistribute your AIS data on the web.